Special sections will follow the boxed folio on Manila by Night. As in most other areas of this blog, items will generally be listed chronologically in reverse, according to date of activity. Each section will contain its own brief descriptor. In place of scrolling further down, kindly click on any of the following subsequent categories:

Narrative
• Ishmael Bernal’s full script of the film, with an English translation by Alfred A. Yuson, published in the literary section of the aforelisted Kritika Kultura issue.
• The PDF of an earlier transcription of the film, published right after the film ban was lifted by the Board of Censors for Motion Pictures but with the text suffering an inordinate number of cuts, including the title changed to City after Dark.
• A detailed storyline, originally drafted for the monograph I wrote for Arsenal Pulp Press’s Queer Films Series.

Interviews
• The last interview with Ishmael Bernal, conducted by Aruna Vasudev and published in 1995 in Cinemaya, the magazine she edited. Unfortunately published without any apparent fact-checking; subject, interviewer, and journal are all gone.
• “Manay Revisits Manila by Night,” an interview with actor Bernardo Bernardo, originally published in Ámauteurish!
• Meta-interview: the source exchange with Bernardo Bernardo, conducted via Facebook Messenger.

Articles
• “Film Plastics in Manila by Night” (August 2012), my contribution to the special issue on the film in Kritika Kultura.
• “Primates in Paradise: Critical Possibilities of the Milieu Movie” (August 2011), a more theoretical consideration of the multicharacter format, in my first Kritika Kultura article.
• “Thinking Straight: Queer Imaging in Lino Brocka’s Maynila (1975)” (August 2011), a reconsideration of Philippine cinema’s other major city film, in my first Plaridel article.
• “Postcolonial Conundrum: Third-World Film in Perverse Perspective,” an attempt at commingling gender politics, film form, and history from below, in my last premillennial book Wages of Cinema (1990).
• “Renewal of Appreciation,” a belated review written on the occasion of a retrospective screening in 1988.

VIDEOS
Sporadic exercises in production and performance, including the odd filmed interview.

• “Acceptance Speech for the Balagtas Award for Film Criticism” (2021) – a recording made by Inha University tech assistant Heechan Yoo; required because of the still-ongoing Covid-19 global pandemic, as part of the online recognition ceremony of the Unyon ng mga Manunulat sa Pilipinas (Writers Union of the Philippines), very slightly corrected in the textual material I uploaded:

• “First Glory Awards of the University of the Philippines College of Mass Communication” (2017) – named after the founding Dean, Gloria D. Feliciano, the first batch honored eight UPCMC alumni, and one guess as to who got cited for film research and criticism:

• “Manwal sa Paggawa ng Pelikula” [Manual for Filmmaking] (2007), celebrated graphic designer Karl Castro’s first film, where he cast me, his former teacher, as a teacher – and despite my hesitancy with lines in Filipino, the piece won the Ateneo Video Open prize for Best Ensemble Performance:

EVENTS
Awards & other occasions attended by an anti-awards advocate.

• “Acceptance message for the 2021 Gawad Balagtas for Film Criticism” is the text of the video broadcast online on April 30, 2021
• “The Millennial Traversals of Millennial Traversals” is the lecture I read during the launch of the University of Santo Tomas’s UNITAS website on August 16, 2018
• 2017 Glory Awards – the first edition of the University of the Philippines College of Mass Communication Alumni Association’s intended counterpart of the UP Alumni Association’s annual recognition for outstanding graduates
• 2016 FACINE Citation – text of the Gawad Lingap Sining [Art Nurturing Award] given by the 23rd Annual Filipino International Cine Festival of the Filipino Arts & Cinema International (FACINE)
• 2016 FACINE Lecture, read during the opening ceremony of the 23rd FACINE festival on October 18, 2016, at the Diego Rivera Theater, City College of San Francisco
• The announcement of FACINE’s Art Nurturer Prize, on page 18 of the October 2016 issue of YES! magazine. Photo was attributed to me, but was actually taken by Ronald Arguelles, Festival Director of Cinema One Originals:

INTERVIEWS OF J.D.
More occasions, this time in print, where I got some light to shine on me.

• Re Ámauteurish! – the top foreign film academic to ever teach film in Pinas (at University of San Carlos), Professor Paul Douglas Grant, asked me about film criticism and blogging for a Special Focus on New Works on Philippine Cinema in Plaridel: A Philippine Journal of Communication, Media, and Society
• Re The National Pastime – journalist Vanessa Ira wrote an article on the occasion of my first book publication, and interviewed me as part of her preparation

INTERVIEWS OF OTHERS
Exchanges with people whose expertise in their respective fields mattered.

• Bien Lumbera – my first Q&A interview, and the only one until my recent exchange with Bernardo Bernardo
• Doy del Mundo – a casual and limited set of questions answered via email by the renowned critic and scholar, on his screenplay adaptation of Lino Brocka’s Maynila: Sa mga Kuko ng Liwanag(1975)
• Rey de la Cruz – the notoriously successful (and successfully notorious) star-builder, no-holds-barred as always
• Pio de Castro III – a film critic and professor whose debut film was produced by the Experimental Cinema of the Philippines (where I happened to be working, hence this assignment)
• Ramon Reyes – first of a planned series of features on outstanding film professionals; the series never materialized, but I did get to cover the best practitioner in the medium’s most overlooked area

SOURCE EXCHANGES
Raw material that served as bases for my articles and reviews.

REMEMBRANCES
People whose time with us makes our remembering them a matter of consequence.

FIL(M)IPINIANA
Materials that may be as useful for others as they were for me.

F.W.I.W.
Basic or raw materials I had gathered, written, or created.

• Annual Filipino Film Chart (2016), an expanded and extended illustration from my dissertation (2002).
• Film 297 (Special Topics) course titled Skinema, offered in 2009 at the University of the Philippines Film Institute’s graduate program.
• The sequence breakdown of Gregorio Fernandez’s 1958 Malvarosa, an appendix from my dissertation (2002).
• “The Reviewer Reviewed”: a reprint of a review of my second book, Fields of Vision, followed by my hasty and rather prickly response.
• “My Big Fat Critic Status” – draft of a letter I submitted to the Manunuri ng Pelikulang Pilipino (Filipino Film Critics Circle) in 1985, requesting for a less-active status, meaning non-participation in the annual awards exercise.
• A bit of high-school juvenilia, written about the woman who became the wife of assassinated civic leader Lean Alejandro. The write-up (appearing in the “Camera On” feature on page 3 of the Christmas 1974 issue of Ang Aninag) had to be short enough to allow for a pic and another interview article (please click on the picture to enlarge it): 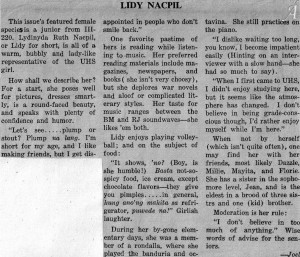 EXTRANEOUS STUFF
Materials from other sources.

• “Transcript of a Mobile Phone Interview of Peque Gallaga by Monchito Nocon” was made for a commemorative volume (that never came out) on Manila by Night.
• One more work not my own: a 2009 undergraduate research thesis (click here for PDF) by an advisee, whose background is even more fascinating than his choice of topic; uploaded with his permission.
• To apply for my current teaching post in 2007, I had to solicit a recommendation from my dissertation adviser at New York University, so I requested Robert Sklar to provide one, available here. Four years later he died in a vehicular accident, before I could acquire tenure and thank him properly. During the winter break of 2013 when the university was deliberating my fitness for tenure, Ellen Paglinauan, my one true film-studies mentor, succumbed to colon cancer. 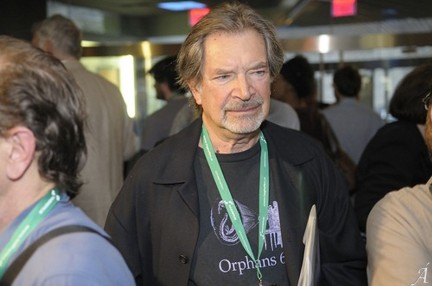 • On exchange at a Korean university, I taught feature writing to students for whom English was a (distant) second language. The goal was to make sure each member of the class could come up with an article. Necessarily this proceeded like a connect-the-dots exercise, with everyone going through the motions one step at a time. The university couldn’t believe the first batch had come up with a class folio, and showcased the results in a slim magazine format (click pic to open file). The next year’s batch included a couple of foreign students but only a posted, rather than printed, folio.
• The first batch of Outstanding Student Awards at the University of the Philippines, as reported in the UP Newsletter’s June 17, 1986, issue; this was when most national-university functions were still system-wide rather than campus-specific. I’m at the leftmost portion of the front-page photo. Clicking on the pic below will enlarge it but the original was in newsprint, so I’m afraid it might still be difficult to discern:

• The (originally restricted) 1981 UNESCO Technical Report, prepared by Christopher Roads for the Marcos government, on “The Manila National Film Centre,” which provides insights on the origins of the building that would become the Manila Film Center, as well as the agency that would eventually be called the Experimental Cinema of the Philippines.